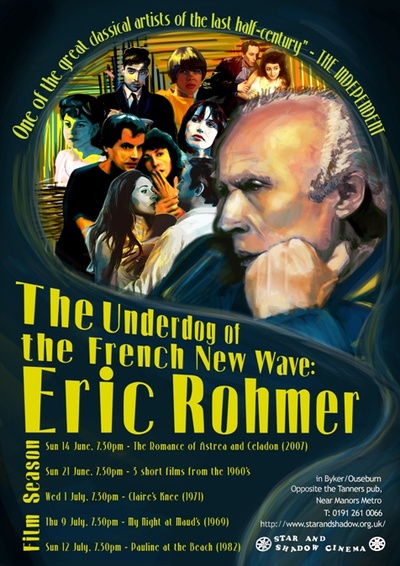 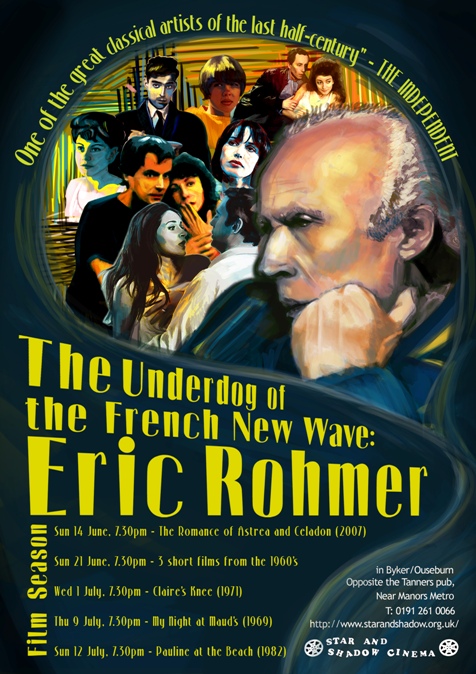 2009 marks the 50th anniversary of one of the most significant movements in the history of cinema, the French New Wave. To celebrate, we have decided to run a season of films from one of the lesser known great filmmakers of this revolutionary movement: Eric Rohmer.

"One of the acknowledged greats of French cinema." - BBC FILM REVIEW

"One of the greatest, an artist up there with Keaton, Renoir, Ozu, Hawks, Welles and a handful of other masters." - TIME OUTEric Rohmer, born in 1920, started making films in the 50's, and has been making films regularly ever since. He is seen as one of the key figures of the French New Wave, and, although not so familiar to British audiences, he is very highly regarded in the world of cinema.

He has won some of the most prestigious film prizes in the world:

- Winner of the silver bear twice at the Berlin Film Festival, in 1967 (La Collectioneuse) and 1983 (Pauline at the Beach)

- In 2001, recognising the significance of the whole of his career, he won the Career Golden Lion at the Venice Film festival

His films are famous for their dialogues: characters debate questions of life, morals and philosophy. A recurring theme as well is the difficulties that characters face in their love life: love encounters, flirts, doubts, and the moral questions around it.

Most of his films "have all spun an intricate web of human joys and dilemma without ever falling prey to false sentiment. Rohmer was and remains the most literary of filmmakers, one whose primary concern is less with dealing in what people do than with what is going through their minds as they are doing it." - THE OBSERVER

"He’s been going his own inimitably sweet way for four-and-a-half decades, ignoring shifts in filmic fashion to focus, with a clear, miniaturist’s eye, on basics: human thought, feeling, behaviour. In this regard he’s perhaps the most dependable director around." - TIME OUT

"Eschewing the genre influences beloved by his New Wave contemporaries, Rohmer’s oeuvre deals exclusively with the drama of intimate relationships. His plots are in the classical mold and are driven by the endless misunderstandings that his cerebral characters, aided by meddlesome friends, allow to complicate their happiness. Like melodies and motifs recurring in different keys, each new entry in Rohmer’s canon enriches the total experience." - THE LOS ANGELES COUNTY MUSEUM OF ART

"Rohmer's example has influenced filmmakers everywhere, from his countryman Bertrand Tavernier to Hong Kong's rising star Wong-Kar Wai. For not only has Rohmer managed to remain true to himself throughout his career, he has done it in one of the most cut-throat businesses of them all." - From a great article in the Observer about him

The French New Wave is a movement that started in the 1950's. and that revolutionised cinema.

“The New Wave was started in the late 1950s by a handful of iconoclastic French directors. The movement took movies away from the big studios and gave them back to the filmmakers themselves. Shot on location and on the fly, French New Wave cinema was smart, irreverent, quirky, and fun. It breathed fresh air into the stodgy climate of the 1950s and inspired moviemakers around the world. Pulp Fiction’s Quentin Tarrantino even named his production company after a New Wave film.”

The movement was mainly made of young people who were critiques in a film magazine that has now become very cult internationally: "Les Cahiers du Cinema". They were intellectual, demanding, and ambitious. They fell in love with Hitchcock before he was famous, but also loved Howard Hawks, Orson Wells, Charlie Chaplin and Joh Ford.

They developped the theory of "auteurs", claiming that the director should be the real "auteur" of his films, in opposition to films made by "studios", as "products", and with no real personality.

Many people formed this movement and it is very hard to make a realy list of who was part of it, but the 5 main directors that are now quoted as making the New Wave, are Jean-Luc Godard, Francois Truffaut, Eric Rohmer, Claude Chabrol and Jaques Rivette.

It is generally considered that the French New Wave started in 1959, with the release of The 400 Blows from truffaut, so 2009 sees the 50th anniversary of the movement. This anniversary has been widely celebrated around the UK. The British Film Institute had a great season of their films in May and June 2009.

The wikipedia page for the New Wave is, as ever, very well made - read it here.

Eric Rohmer's films are not shown very often in the UK, and we are very proud to be able to make you discover these films that are incredible, and that you will see nowhere else in this country.

All the films will be shown on 35mm, and the prints are being sent from Paris, from the archives of the audiovisual section of the French Ministry of Foreign Affairs.

This season would not have been possible without the support of the Institut Francais and CulturesFrance, and we are very thankful for their help.

For this seaosn, we have selected some of Eric Rohmer's best films.

First of all, we will be showing his latest film, the very surprising and delightful The Romance of Astrea and Celadon (2007), and this has also been said to be his final film.

Then, we feel privileged to be able to show his very early work, made at the time of the birth of the French New Wave: hist first short films - on 21 June - absolute gems, don't miss them! The films will be accompanied by a discussion with Sarah Leahy, specialist in French film at Newcastle University.

Most of the film nights will be followed by discussions, with French film specialists or enthusiasts, and with the Philosophical Society of Newcastle.

Film: The Romance Of Astrea And Celadon (Les Amours D’Astree And Celadon) (2007)

Absolute masterpiece and great commercial success, the film tells the story of a man being tempted by a young woman and her knee…

Nominated for 2 Oscars and officially selected at the prestigious Cannes Film Festival.

Winner of the Silver Bear at the Berlin Film Festival, "Pauline at the Beach is another rare Rohmer treat.” – The New York Times