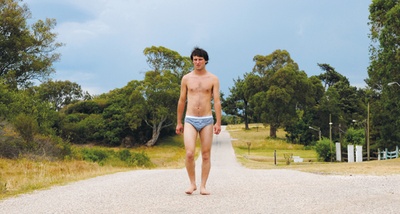 From 14 to 28 November, the Star and Shadow Cinema will be showing a selection of 5 incredible and surprising films from Latin America, from 2003 until 2009.

Not very well known and sometimes never shown in the UK before, they have all won great prizes at film festivals around the world, and show a new face of Latin America.

The films selected are from Argentina, Mexico and Uruguay.

In Uruguay, due to a change in government funding, there has been a massive increase of films made since 2000, and some great directors have emerged from there. We are showing 3 films from that country: Hiroshima (2009 - totally incredible, unique, magic film), The Dog Pound (2006 - slow, following the life of a 25 year old who doesn't do much), and Whisky (2003 - dark comedy about 3 strange characters).

From Mexico, we are showing an incredibly beautiful film, Alamar (2009), about the lives of 2 fishermen and a little boy, in the middle of the stunning landscape of the blue Mexican sea, the sun, and the noise of the waves.

Why the Star and Shadow Cinema chose these films

Artistically ambitious/new in their form

We'll be totally honest - these films are not necessarily easy-watching/crowd pleasing/uplifting/feel good, etc. They are not depressing or shocking either. They are just a bit confusing, but in what we think that is a good way - artistically ambitious, visually interesting and beautiful, subtle in their plot and character development,  and hard to decipher all at the same time. Really quite new in their form, a bit like art films.

I suppose one way to sum it up is that they are not obvious, that they are hard to categorise, they just feel really different to a lot of what we see at the moment.

All the films selected are slow, contemplative, visually beautiful, dealing with rather lonely characters who have funny/complicated ways of relating to the world. They do not present any inletellectual analysis of behaviours or characters, but are rather like visual illustrations of a particular mood. We found these films refreshing and inspiring, and we were surprised that several films from such a big continent had a similar feel about them, similar characteristics.

Not the usual Latin American Image

We also liked these films because they didn't correspond to what we expected from Latin American films: they are not about drug wars, guns, favelas, or salsa dancing. They talk about every day things and characters, but in an extremely ambitious way. Their subject matter is not necessarily political or thematically important - the way the films are made and the general atmosphere they create are more important.

We came accross a lot of these films through the (very fabulous) Rotterdam Film Festival (in Feb 2010). We loved them, met some of the directors who turned out to be super nice, and we have been thinking about programming a season of their films ever since.

Most of these films have won prestigious awards in film festivals around the world, but they have either never been distributed in the UK before (Hiroshima), or very little (all the others). So we thought that it would be great to programme them at the Star and Shadow Cinema, and to show these films that might never be discovered otherwise.

Lucrecia Martel is one of the most promising Argentinian directors around. She has won prizes at some of the most prestigious festivals, and we are very proud to be showing her latest film. A “brilliant, maddeningly enigmatic puzzle of a movie” (The New York Times), about a woman confronted with guilt, and the history of Argentina.

Incredible film, at once experimental in its form, challenging in its content, and visually beautiful: this is a non-identified floating object. Best described as a silent musical: no dialogue is heard at all throughout the film, but music from unsigned Uruguay rock/metal/psychedelic bands make the film fly. 24 hours in the life of a singer with autistic tendencies.

A visual poem in the stunning setting of a little house in the blue Mexican sea, where a father shows his 5 year old boy how to go fishing. Between documentary and fiction, this little gem has won prestigious prizes, among which the highest prize (tiger award) at the Rotterdam Film Festival.

Winner of the Best Film Award at the Rotterdam Film Festival, and elected Best Uruguayan Film of 2006 by the country’s Association of Film Critics, this is a slow and contemplative film about David, a 25-year-old who loves smoking pot, and has a heroic capacity for doing nothing. Tragicomedy of a slacker, shot on 16mm.

Multi-awarded at some of the most prestigious international film festivals (Cannes, Tokyo, Chicago, Peru, Spain, etc), this is a very subtle film about human communication, or the impossibility of it. The owner of a sock factory asks one of his employees to act as his wife during the visit of his brother.