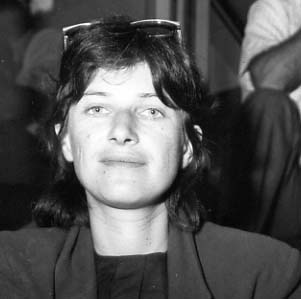 CINEMA of IDENTITY:  ID id IDea.  WHO AM I?  CHANTAL AKERMAN with breathtaking audacity takes the cine-camera to map a journey into being using image and sound.

A minority female voice in a minority Jewish culture in Belgium,  Akerman's films subvert history and gender making simple gestures the basis of a revolutionary personal politic.  The season includes an open seminar on her Cinema of Identity led by Adrin Neatrour

Belgian filmmaker, Chantal Akerman has created a body of work spanning forty years, and yet her films are perhaps less well known than other long-serving experimental directors of our era.

Akerman’s work is always highly personal, beautifully stylised and always shockingly frank. Her visual style is as bleak as an early Cronenberg and as polished as Kubrick at his best, but that’s not to say it’s derivative in any way. Indeed, Akerman’s work has proved to be influential on many other experimental directors - it’s hard to watch a Jim Jarmusch film without feeling a small flashback to some of Akerman’s classics.

Chantal Akerman is a pioneer of feminist cinema and one of the few directors that succeeds in truly exploring the reality of her characters. The often-heard phrase ‘unflinching portrayal’ could have been coined to describe her work.

Akerman challenges constantly, both herself and the viewer, and each of her works has a tremendous power beneath its stark exterior.

CALL FOR ENTRIES - STAR AND SHADOW ONE SHOT FILM FESTIVAL

Chantal Akerman is one of the most radical filmmakers of her generation. Radical not so much for the content of her films, she shared these concerns with many others, but radical, like Goddard, in the intensity which she brought to her work. Her films affirm the possibility of a cinema that seeks out identity. With breathtaking confidence and lack of fear, her camera maps out the agitation of a personal journey in image and sound using film to subvert history and gender.

The Star and Shadow Cinema announces a call for entries for short films with the theme: “ID: I am”.

1) All submissions must take the form of one shot: one uninterrupted shot.

2) The maximum duration of submissions shall be 4 (four) minutes.

3) Submission and exhibition format: DVD - PAL. All submissions must have: title, contact details and duration marked on the DVD.

4) All submissions must have good title to the material.

Sexually frank, cooly passionate, Chantal Ackerman's extraordinary first feature, in which she plays herself exploring lines of flight. A room with powered sugar, the cab of a truck, the flat of a rejecting lover. Minimal in style, maximal in impact.

At the core this film lies the performance of Delphine Seyrig (Last year in Marienbad), whose command of gesture and timing make this observation of bourgoise life a choreographed nightmare. A film that is awesome for the steel tipped certainty with which Chantal Akerman imbues her material.

An itinary of hotel rooms, train stations interstitial spaces and chance meetings during which the protagonist comes home to spend a night with her mother. Another journey film a refusal to stay still, Chantal Akerman chooses motion

Film: Toute Une Nuit - Due To A Last Minute Problem, This Film Will Be Replaced By Another Film From Akerman: News From Home (1982)

Toute Une Nuit screening will be replaced by another film from the same period by Chantal Akerman due to last minute unavailablity of the requested film. The new film will be NEWS FROM HOME (1976)